One day when I was a Huey crew chief we slung a Jeep trailer under the helicopter on a strap that was WAY too long.  The trailer started swinging in huge arcs under us and I had a hell of a time directing the pilots and getting control of the load.  We finally managed to get the trailer back on the ground safely but it was a close thing.

So when a friend of yours tells you he is going to land his Mig-21 on a 5000 foot runway and you know that 5000 feet is WAY too short what do you do?  Obviously you first try and talk him out of doing such a dumb thing, because if anything goes wrong he’s not going to get a 1960’s era fighter with a 210 knot approach speed stopped before running out of runway.  If you fail at talking sense into the knucklehead what’s option 2?  Ask a different buddy if he wants to head out to the airport the next day and watch a Mig-21 go off the end of the runway.  This is the situation a skydiving friend of mine found himself in last Friday as he set up to take photos on the approach end of the runway the Mig was going to land on. The pilot brought the Mig in on as shallow an approach as possible and touched down right on the numbers.  But when he deployed the drogue chute instead of the comfortable tug of deceleration there was a loud POP! as the chute separated from the lines.  For a MIG-21 to land successfully on a 5000 foot runway everything has to go perfectly and losing the drogue chute is exactly what you worry about.  My friend continued to take pictures as the the Mig ran off the end of the runway in a big cloud of dust but was relived to see it come to rest without an accompanying fireball.  A sad end to a great aircraft due to pilot stupidity, what a shame. 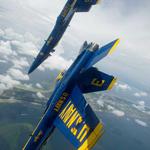 Scenes from a Russian control tower.

John: (Who NEVER lets anyone hold his camera, because if they drop it we’re screwed) “Why of course you can Olga.”

While taxiing at London ‘s Airport, the crew of a US Air flight departing for Ft Lauderdale made a wrong turn and came nose to nose with a United 727.

An irate female ground controller lashed out at the US Air crew, screaming: “US Air 2771, where the hell are you going? I told you to turn right onto Charlie taxiway! You turned right on Delta! Stop right there. I know it’s difficult for you to tell the difference between C and D, but get it right!”

Continuing her rage to the embarrassed crew, she was now shouting hysterically:

Now you’ve screwed everything up! It’ll take forever to sort this out! You stay right there and don’t move till I tell you to! You can expect progressive taxi instructions in about half an hour, and I want you to go exactly where I tell you, when I tell you, and how I tell you! You got that, US Air 2771?”

Naturally, the ground control communications frequency fell terribly silent after the verbal bashing of US Air 2771. Nobody wanted to chance engaging the irate ground controller in her current state of mind. Tension in every cockpit out around Gatwick was definitely running high. Just then an unknown pilot broke the silence and keyed his microphone, asking:

“Wasn’t I married to you once?”